MAPPING THE NOW HERE is a collective, interdisciplinary long-term research project shared among researchers, visuals artists and activists. The research seeks to connect spaces and images of resistance within the current context of an ongoing socio-political transformation in the Mediterranean.

The transformations of the last 15 years, especially since the economic crisis in Southern Europe and the so-called “Arab Spring”, have led to a vast production of images of resistance. On a macro level of media visibility, we witness the emergence of various protests that seem to happen simultaneously and affect each other around the globe, expressing a profound criticism of the system. The urban streets seem to have become a “global stage” for enacting political change. Originally, the same places were designed to segregate communities and impede any political insurrection and transformation of the social order from “below”. But rather than thinking about the protests as a homogenous political movement on a “global stage of resistance”, we assume that the political space is dynamic, heterogenic and antagonistic. Within the last years, a contradictory discourse about capitalist economy and political structures has evolved, developing very different ideas of structural change.

These developments have led us to think about the STREET AS A SPACE OF RESISTANCE and to take a close look at the IMAGES OF RESISTANCE.

MAPPING THE NOW HERE creates an audio-visual political cartography of the streets of resistance in the Mediterranean metropolises Athens, Madrid, Rome, Istanbul and Cairo.
The project combines the research and field work of political, cultural and film studies with filmic production. Within these fields, we work with documentary techniques as well as with poetic means, moving between subjective experience and theoretical considerations. Through this interdisciplinary approach, we hope to understand the practices and struggles of the protagonists of resistance on the streets of the Mediterranean. We take a close-up look at the streets’ dynamics to reveal some of the political paradigms of change produced in these places.
We aim to deconstruct the ideological identity of the political space through a poetic-political re-mapping of the territory, learning from the street and taking it as the laboratory for political practice.

Within the project, these two research strands are worked through a series of perspectives and actions:

STREET AS A SPACE OF RESISTANCE:
RE-THINKING STREET AS A POLITICAL SPACE
A geopolitical evaluation of the Mediterranean streets

The space of the Mediterranean metropolitan streets and their protagonists’ resistance practices and the images produced by them to visualize their struggles and demands, marks our field of work. We understand “street space” not only as a physical urban landscape, which is used as a strategic and symbolic stage for political debate. We seek to re-think it as a protagonist with its own peculiar logic and vibrant dynamics, generating ideas of politics and subjectivity, aside from opposing the political status quo. Objects, subjects and their practices constantly re-create the streets’ space and produce various notions of a public sphere.
In our geopolitical evaluation of the streets in the Mediterranean metropolises we engage in the following activities:

IMAGES OF RESISTANCE:
RE-READING THE VISUAL NARRATIVE OF RESISTANCE
A filmic perspective on migrating images of resistance

What happens to the image, once it begins to move? The travelling, migrating image connects and re-presents political struggles and spaces. It can be used as a tool for powerful political action. Yet, at the same time, it creates global narratives of resistance which are permanently turned into “ideological” arguments, not being reflected critically. Through the perspective of film- and cultural studies, we engage with the visual narrative of resistance. We focus on the use of image production within the context of political struggle and the politics of images. The critical analysis goes hand in hand with a film production that questions the mechanisms of visual ideologies, using poetic narration to interfere with these mechanisms.

To re-read the visual narrative of resistance, we will engage with these questions and activities:

– Analyze how narratives are being constructed with images, asking what kind of visual narratives or narratives of resistance are being produced
– Question the means of image-making as a political tool
– Film production: experimenting with documentary and performative film strategies and strategies of representation of the urban street-space as the stage and battlefield of political conflict

This project is supported by: 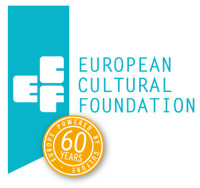